Born on October 19, 1927, in Brussels, Pierre Alechinsky grew up with varied artistic interests that included graphic techniques, folk art, and medieval book illustrations. From 1944 to 1948 he studied art at the École nationale supérieure d’architecture et des arts décoratifs (La cambre), Brussels. Alechinsky joined the group Jeune Peinture Belge (also known as Jonge Belgische Schilderkunst, young Belgian painters, 1945–48) and had his first solo exhibition in the Galerie Lou Cosyn, Brussels, in 1947. During a stay in Paris in 1948, he was deeply impressed by the work of Jean Dubuffet and Max Ernst, feeling particularly drawn to the former’s Art Brut. In March 1949, Alechinsky Pierre visited an exhibition featuring artists from the Cobra group (1948–51) at the Séminaire des arts, an experience that would have a lasting effect. Formed by painters from Copenhagen, Brussels, and Amsterdam, the movement distinguished itself through bold, expressive compositions inspired by folk and children’s art, as well as by the work of Paul Klee and Joan Miró.

From 1949 to 1951, Alechinsky devoted himself so intensely to Cobra—organizing exhibitions and running the group’s eponymous magazine (eight issues, 1949–51)—that he produced little work of his own. His distinctive use of script as a means of pictorial expression came out of his exposure to Cobra artists such as Karel Appel and Asger Jorn, and in 1951 he moved to Paris to study engraving. While there, he discovered an interest in Asian calligraphy. He traveled to Japan in 1955 and the following year made Calligraphie japonaise, a film about Japanese calligraphers. Fascinated by the way they placed paper on the floor and bent over, using their entire bodies to make their works, Alechinsky adopted the method.

Around 1958, his subject matter became more fantastic in nature, and he began using brightly colored acrylics to render comically deformed creatures that often communicate via speech bubbles. The creatures recall Hieronymus Bosch, Pieter Brueghel, and James Ensor—Flemish painters that Alechinsky admires and to whom he sometimes pays homage in his paintings. Since the mid-1960s, Alechinsky has worked primarily on paper. He has returned to his roots as a student in Brussels in his later work that refers to medieval pictorial illustration. From 1983 to 1987 he was a professor of painting at the École nationale supérieure des beaux-arts, Paris. 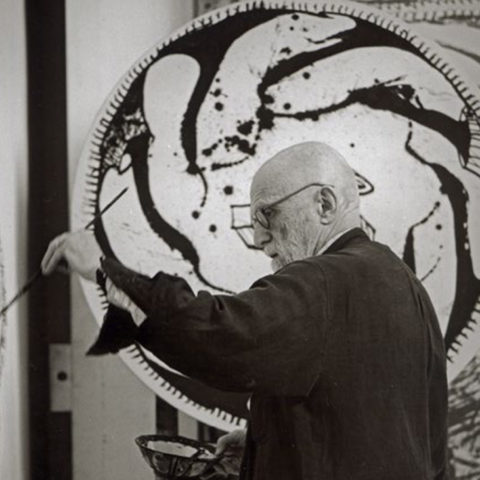