Bernar Venet (France 1941) is a French Conceptual artist known for his curved, mathematically precise metal sculptures, and for his material exploration of coal, asphalt and tar.

The painter and sculptor studied at La Villa Thiole in Nice in 1958 for a year before pursuing a career as an artist. Friends with Arman, Jean Tinguely, Donald Judd, and Sol LeWitt, Venet worked within Minimalist and Conceptualist modes during the 1960s and 1970s. During the 1980s, he continues to develop his art along logical lines. He also composed, choreographed and imagined the costumes and designs for Jean-Louis Martinoty’s ballet Graduation. In the 1990s, Venet creates his series of work Indeterminate Lines and subsequently his Arcs which are exhibited in different places over the years. The artist established the Venet Foundation in 2014, which serves as a museum and archive of his oeuvre. He currently lives and works between New York, NY and Le Muy, France. Venet’s work has becomes known internationally and is held in the collections of The Museum of Modern Art in New York and the National Gallery of Art in Washington, D.C., among others. He continues to produce works in all media, including painting, music, and sculptures, that are exhibited across the world.

Exhibiting art as a challenge to technology, Bernar Venet inaugurates in 2019 his monumental work entitled ‘l’Arc Majeur’ along the E411 highway, bordering the Belgian provinces of Namur and Luxembourg. After a 35-year wait, the Arc Majeur, in rusted Corten steel has finally been unveiled. Spanning 75 meters in diameter, the long arch is 60 m high and consists of three sections, each 20 m long and 2.25 m thick; the short arch is 20 m tall and consists of one equally long and thick section. The whole construction weighs 200 tonnes. 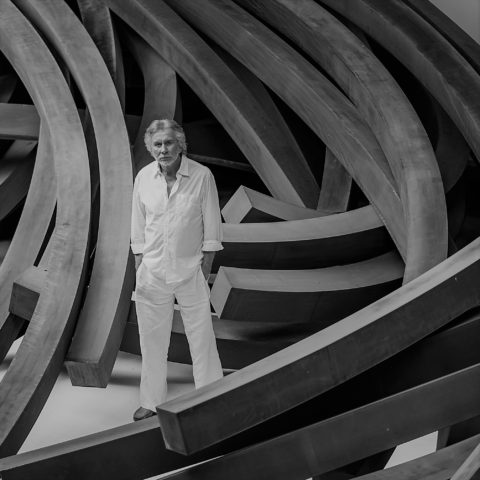