Jacques Doucet was born in 1924 in Boulogne-sur-Seine, France, and died in March 1994 in Paris.

Doucet was interned as a political prisoner during the war, an experience which would have an effect on his work as a painter. He went to grammar school in Paris, wrote poems, made drawings, and in 1942, at Saint-Benoit-sur-Loire, he became the friend of the poet Max Jacob, who encouraged him to paint. At the Liberation, he studied for some time at the academies of Montparnasse.

In 1947 he exhibited at the “Europaiskola” in Budapest, where he met with Corneille who involved him with the Dutch Experimental Group in Holland (1948). He created the cover for the second issue of Reflex.

After having been a member of the movement “Surréalisme révolutionnarie francais, he joined Cobra in 1948 together with Jean-Michel Atlan (1913-1960), within which he would be actively involved with maintaining contacts.

Doucet Jacques worked with all sorts of different materials. His work took on a much more abstract style after the Cobra period.

He has regularly had exhibitions in France, Italy, Holland, Sweden and Denmark. His works are found in the museums of modern art of Paris, Valence and Toulouse in France, of Aalborg and Silkeborg in Denmark, of Skopje in the ex-Jugoslav Republic of Macedonia, of Mexico and of Stockholm in Sweden. 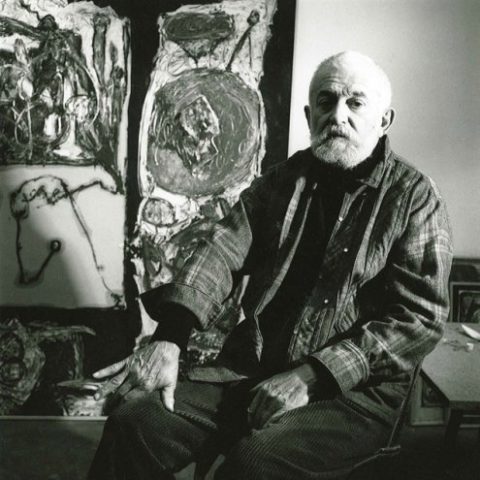