Nick Brandt was born in London in 1966 and grew up in the British capital where he later went on to study film and painting at Saint Martin’s art school.

He moved to the United States in 1992, which is where he made video clips for artists including Michael Jackson (“Earth Song”, “Stranger in Moscow”), Moby, Badly Drawn Boy and Jewel.

He took his first steps in his photography career in Africa in 2000, and which is where he made all his following works. Nick Brandt’s first book of photography, “On this Earth”, with a foreword Jane Goodall and Alice Sebold (author of “The Lovely Bones”) was published by Chronicle Books in October 2005. He has been exhibiting his work in major galleries in London, Berlin, Hamburg, New York, Los Angeles, Santa Fe, Sydney, Melbourne, San Francisco etc. since 2004.

He founded the Big Life Foundation in 2010, a foundation focused on protecting the fauna and wild nature in the East African ecosystem. Nick Brandt currently lives in the Southern Californian mountains.

With the photographs in his works “ON THIS EARTH” and “A SHADOW FALLS”, Nick Brandt gifted us a majestic picture of a breath-taking part of Africa, a green paradise on earth inhabited by wild animals in all shapes and sizes.

Building on the momentum of his previous works, in “ACROSS THE RAVAGED LAND” he introduced us to the terrible side of this mythical natural beauty that is pursued by a tragic and inevitable fate. Nothing remains of the sublime landscapes, where it once appeared that life would reign eternally, but the acknowledgement that man has passed through. Using his lens, Nick Brandt confronts us with the disturbing reality where former kings have now become majestic martyrs, with portraits of animals that liken to saintly images honouring the once protected Africa.

Using an anthropomorphic approach, the photographer captures the human dimension of these creatures doomed to extinction, at the same time giving the images a bewildering, aesthetic power.

They are mysterious images that once again confront us with a mix of beauty and fatality.

Nick Brandt founded the Big Life Foundation in September 2010 as a response to the dramatic increase in poaching. The Big Life Foundation is a non-profit organisation focused on protecting the African ecosystem. The foundation creates innovative strategies to combat the greatest threats and simultaneously wants to improve the quality of life for the Maasai tribe through considering their economic interests.

The Big Life Foundation also aims to reduce the conflicts between man and nature, primarily through combatting poachers and the ivory trade, by protecting the large predators and through better management of the scarce and vulnerable natural riches.

The foundation’s first large scale project is situated in the Amboseli region stretching from Kenya to Tanzania. Plagued by poachers, the region is the home base of one of the largest elephant populations in Africa. The foundation has employed various travelling ‘anti-poaching rangers ’in the most vulnerable areas in this immense region.

If you would like more information or would like to support the Big Life Foundation, go to: www.nickbrandt.com and https://biglife.org/ 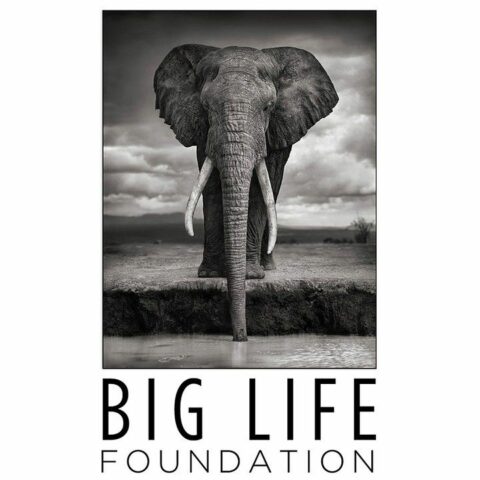