Jean-Michel Atlan was born in Constantine, Algeria, on 23rd January 1913. He was active as a painter, poet and philosopher. Atlan studied philosophy in Paris from 1930 to 1939.

His work as a teacher was interrupted by the war. He managed to go into hiding in a psychiatric hospital, where he wrote poems and started to paint. His studio in Paris developed into a meeting centre for artists after the war. Atlan’s artistic role within Cobra was quite limited, but he was of great significance as a result of his studio. All of Cobra’s informal meetings took place there. Atlan was a member of the French branch of Le Surréalisme Révolutionnaire. Despite the fundamental difference with Cobra in relation to the method for uncovering the subconscious, several members of this group would later still sympathise with Cobra. Atlan, who had come into contact with Asger Jorn (1914-1973) and Christian Dotremont (1922-1979) as a result of his membership, decided to join Cobra quite quickly.

He managed to achieve a perfect synthesis in his work between the scientific and the more literary approach to surrealism and Cobra’s mythical and spontaneous world. In order to, as stated by the expressionists after 1945: “escape the rule of reason and to eventually realise the rule of life”. Atlan initially painted expressionistically. The natural desire for that vital expression of what the primitive Negro Art meant to Cobra would always be recognisable in these ornamental shapes, which would be almost reminiscent of dancers, sometimes black, sometimes lyrical with soft poetic colours.

Atlan Jean-Michel had a number of solo exhibitions in Paris during the 1944-1947 period.
Various exhibitions took place all over the world from 1950 onwards. 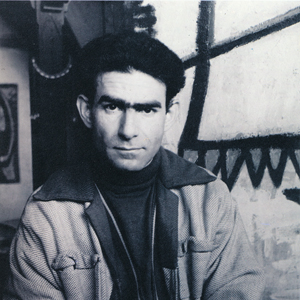